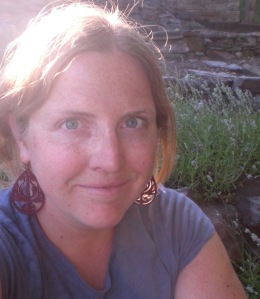 The Kitchen In Missoula

I catered for a fundraiser on Tuesday night called Taste of Freedom. It’s an event to help raise money to fight human trafficking, specifically at Sturgis this year. So myself and some other caterers donated some time and took some treats out there. It was a whiskey and distilled spirits tasting, so a bunch of Montana distilleries were on hand, sharing a bunch of their stuff, a good cause. There was a live auction and a silent auction. I also got to auction off dinner for 4 which was part of that. I made a couple of appetizers that was part of that, all vegetables.

I wanted to use, I don’t have a very big garden, but I have a friend who is Hmong,  her family has a garden and a stand at the Farmer’s Market and so I just kinda  went to the  Market last Saturday, and she had a big batch of golden beets out, so I grabbed a huge bag of those.

I was hoping the Dixon melon guys would be there, but they weren’t ready yet so I had to get my cantaloupe at COSTCO, but I’m ok with that on occasion. And so we ended up doing a couple of things.

I did a Greek layered hummus dip. So I did some homemade hummus. One of my best friends from college, it’s her recipe, she’s a vegetarian, and she has some great recipes. And hummus is so easy to make at home, it tastes so much better then the stuff you get in the store.

Hummus, all it is is chick peas, and tahini which is a sesame sauce, it’s not even a sauce as much as a paste…

It kind of reminds me of like peanut butter.

Yeah, you could spread it on toast if you wanted to.

… lemon, garlic, a little salt and pepper, and I put red chili flakes in mine to just for a bite.

I put it in a bowl and topped it with kalamata olives, sundries tomatoes, and cucumbers, and then I had a bowl of pepoerchini sitting there too, because I know everyone doesn’t always like hot stuff even though I do.

Then we did other two recipes, that were a little more labor intense. 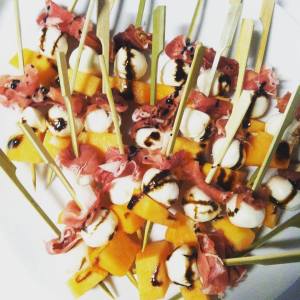 We did a Cantaloupe, Mozzarella and Prosciutto Skewer, with a little bit of Balsamic Reduction.

It’s pretty easy, cut the cantaloupe up, use mozzarella balls. I went to the Good Food Store and had them slice prosciutto very thinly, so it was really easy to kind of roll up and put on a skewer.

Do you want to explain what prosciutto is in case anyone doesn’t know?

Prosciutto is pork, well start there, it is a cured, meet, you’ll see it a lot on charcuterie plates in Europe, it’s becoming way more popular here in the US, and even in Montana. It’s just delicious, if it’s cured correctly it just melts in your mouth when you take a bite of it. You know there’s some usually good fat marveling in it, if you like bacon you will love prosciutto.

Then I drizzled a balsamic reduction over that, which you really just take balsamic vinegar and reduce it, I like to make it on my burner on my outdoor grill. The first time I made it I made it in the house and I had to have the windows and doors open.  It was like 30 degrees outside, because it stunk the house up so bad, it like stung your eyes, it was like a kitchen full of onions. So if you do want to make your own balsamic reduction, either have your fan on or vent, you just bring it to a boil and let it reduce, and pour it out of a squeeze bottle. It’s a sweet syrupy favor. 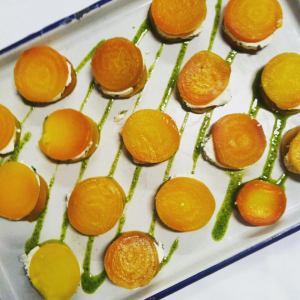 The last appetizer which was the biggest hit was a golden beet, and goat cheese stack with a fresh basil oil.

The fresh basil oil is as much a plate decoration as it is for taste. All it is, is good olive oil, basil that’s been blanched, and salt& pepper. Blanching is something you can do to keep your color of your vegetables, but not cook it all the way through, technically. So you put them in boiling water for literally 10 seconds and then you take them out, and let them dry. Pat them dry, then add them to the olive oil and it makes this beautiful bright green dressing.  So I used that.

Then the golden beets, I just roasted them a 400 degree oven, just wrap the beets in foil. Check for tenderness. It’s hard to overcoat beets, but it’s possible. They get a little burned on the water. I suggest wrapping your beets in foil, use a rimmed baking sheet and just pouring a little bit of water in there. Don’t add water half way thorough if you have a glass pan, it will shatter, I speak from experience. You can do it if you have a metal baking sheet, it will make some funny noises.  Take the beets out let them cool till you can touch them,

If they’re cooked, if they’re done, the skins will be really easy to just rub off. I like to do it  under some running water, just

One it helps your fingers not stain so much, you can always wear gloves too if you wanted to, and the golden beets certainly don’t stain as much as the red ones do. So take skins off, and then I take a 2” in diameter biscuit cutter, and slide it. All my beet size would be 2 inches in diameter so they were the same size as the goat cheese roll was. I did it in stages, so I did the cooking Monday and then assembled everything Tuesday.

So what I did with the goat cheese. I went out to the garden and got some thyme, chives, basil, a little bit of rosemary and I chopped it up really tiny, and then I took the logs of goat cheese and rolled it up in the fresh herbs. So you put a piece of plastic wrap down, and sprinkle your cut up herbs over it, and then roll it and wrap it at the same time. It makes for a beautiful piece of goat cheese. So then you just assemble them.

I cut the goat cheese 1/4 inch slice, put it between beets.

Could always do a few stacks so you can make a nice tower of beets.  If I was doing it for a dinner party of 6-8 people, when I’m making it for a big group of people I want something that’s just easy to eat. Golden beet a little bit of goat cheese, and sprinkle with a little sea salt, and the basil oil it’s just delicious.

I gotta say Marisa, it sounds delicious  and every time I get off the phone with you I am so hungry and inspired to cook something good. So it’s working.

The thing is too, a lot of people don’t take time to think about is that you can make really good fancy delicious food, if you just start with good ingredients. They think to make a beautiful meal You have to spend 4-5 hours in the kitchen and it’s not true if you start with great produce and great meat or whatever it is that your eating it’s really easy, to make a simple delicious quick meal.

That’s what my mom always says, and I have to say when she cooks, I watch her and say how did you do that so easy?

The ability to look in the fridge, I have a lb of ground beef. Something I’ve always been able to do. It definitely gets easier the longer I do it. I’m constantly putting things together in my head, when I go to the farmers market I never go with a list, it’s always like oh, hey what looks delicious today, what do I want to eat tonight?

Living in Chicago for a few years, I got used to shopping a couple of days a week, because you had to carry what you brought back to your house either walking or on the el. so i really got in the habit of cooking for dinner what I want, what sounds good tonight? What recipe did I find today?

I try to have a plan, sometimes now. I still go back to more spur of the moment today, it’s more fun.

Let’s talk cake for a second. A lot of the weddings I’ve been doing, I;ve just been doing the deserts. At the very last minute Saturday, I  forgot I had offered to bake a dozen cupcakes. I got a little reminder email I was like Oh, crap!

I have a Nigella Lawson, it’s a fairy cake recipe.

This recipe has saved my tush, so many times. You make it in the food processor, you dump all of the ingredients in, and add the milk as it processes. I think in Montana I bake it for 10 minutes at 350 it makes exactly a dozen cupcakes. Just the greatest little recipe ever. So I came home quickly and made those.

The great thing about cupcakes is that just a tablespoon of something will spice it up. So I put 2 TBS of Evening in Missoula tea in. I live with somebody who is a chocolate lover and these are his favorite cupcakes. It surprised both of us he loved us so much.

I got the idea, originally from a camomile recipe I found somewhere.  And Evening in Missoula is like a camomile tea.

Wait, let me just go back a step, so do you mean like you brew the tea and add the liquid or the tea leaves themselves.

The tea leaves. I try to put the Evening in Missoula tea in food processor to chop up some of the longer pieces of camomile. It goes right through the cupcake. Because I added that I did have to add a little more milk then the recipe called for just to keep the batter a consistent level.

My friend is a bee keeper in Seattle and makes this gorgeous honey, so I made a shipwreck honey glaze. So all it is is powdered sugar, honey, a little bit of heavy cream or milk. You just mix it up, and the glaze makes some beautiful cupcakes.

Lavendar is such an underated herb to use, I love using it in baking. I haven’t experimented it too much in cooking, but I might do that.

I’ve put them on cupcakes, crushed it up and made a lavender honey glaze.

I’ve had earl gray cupcakes, it’s a great flavor, but you can overdo it really easily, so it takes some experimenting.

Earl Gray Tea cakes with like a honey glaze. Like London Fog in a cupcake form. Delicious!

If you like what you heard on the Organic Gardener Podcast we’d love it if you’d give us hopefully a 5 star rating on iTunes so other gardeners can find us and listen to. Just click on the link here:

If you have any comments, questions, guests you’d like to see, or topics you’d like us to cover please send us any feedback positive or negative. We’re here to serve our audience and we can only improve with your help!!! Thanks for visiting Mike’s Green Garden changing the world one garden at a time.

This site uses Akismet to reduce spam. Learn how your comment data is processed.